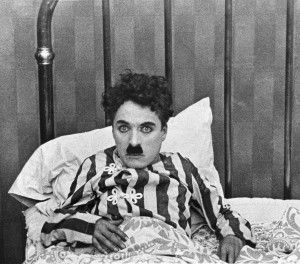 To hone the visual thinking and creative skills needed to be a master visual story-teller and top-notch videomaker, it’s a great idea to begin with this simple exercise.

Practice creating simple stories that rely on nothing but 5-7 pictures to tell a story.  No dialogue!

These would be similar to old silent movies, just MUCH shorter.  Just 5-7 shots.  Hollywood learned storytelling this way so should you!

Now, this is just an exercise and the point is to stimulate your ability to THINK VISUALLY.
So you can actually video these stories, but it’s easiest to begin with simple visual drawings.  They do not have to be quality drawings, stick figures will do.  In fact, you can use any readily available visuals.  My college had us cut pictures from magazines.

The point is, no expensive equipment is needed.  Make the visuals simple and easy to obtain so you can concentrate your efforts on WHAT VISUAL TELLS THE STORY?

Beginning Film School students are given assignments like this.

In another article about visual story-telling, I gave a list of ten possible story lines. In this post, I picked out three and illustrated them as examples. I’ll go into detail on the visual storytelling within each example so you can get a better idea of what I mean and adapt these techniques to your own video making. 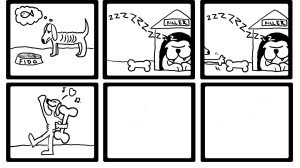 In the first frame, the dog is obviously hungry because he’s staring at his empty food bowl, he has a pitiful expression on his face and he’s fantasizing about a tasty fish. You can also see his ribs, which makes him a chronically hungry dog.

In the next frame, you see a beefy dog named Killer, sound asleep. Without the sound effect of the snoring, it might be difficult to tell killer is asleep. Oops, we”re cheating a little on the rule of no words allowed but sound effects are okay!

Because Killer is asleep, it makes it possible for Fido to snatch the bone easily. This ensures the story won’t get bogged down in a dog fight, nor does Fido have to do anything complicated. Both of those scenarios would probably make the story move beyond three to six pictures. In this case, only four shots were needed and one of the truisms of video production is shorter is always better. Be concise and tell your story as quickly as possible.

Do you think the story of our canines would be more visually interesting if the final frame were a close-up of happy Fido instead of a WS? Would the story be told as well if frame #3 were a close-up with Killer cropped out? These are all things for the visual story-teller to think about.

Here’s scenario #6, teenager aces test after studying all night. This one was almost too easy! 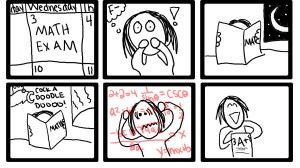 The close-up of the calendar sets up the story. The obviously freaked-out students fearing an F- speaks to most of us. But how do you convey to your viewer she spent all night studying without any dialogue? That’s easy too. Just place her desk near a window where the viewer can see it change from night to dawn. The rooster is for humor and reinforces the idea of dawn.

Taking the test is quite a harrowing experience for our girl but the A+ grade and her happy expression are simple to understand. As the video producer, you’d have to think of these details before you shoot so you can have all the needed props on hand.

To be critical, is it obvious what frame #5 is about or do you need to see the wide-shot of her in a classroom? Would frame #6 be better if it were broken into two shots, a CU of her grade and a CU of her face? Or does the A+ stand out well enough without the CU? Notice how the two MS of her studying work together because they are the same medium-shot scope and the window is an important storytelling element.

Since #6 was so easy, let’s also do #7, which seems to me to be the most difficult. How do we know our hospital patient is terminal? 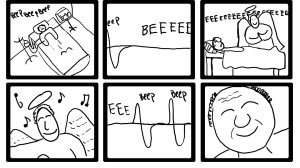 The machine next to his bed flat lining is instantly recognizable and it has to be done in a CU so the viewer concentrates on it and thinks of death and not “Gee, there’s a lot of expensive stuff in a hospital room.”

In the third shot, the angel pops in to provide the miracle and the machine goes from flat line to a heart beat. The expression on his face tells you he’s recovered!

Was the CU of the angel in panel #4 necessary? Does the CU of the machine make sense? Was it wise to end on an ECU of our man or should it have been a WS with family and friends? As the producer, it’s your call. What will it be?

If you’re serious about increasing your visual story-telling skills, practice this exercise as much as possible. It’s fun, easy and really makes you think! Keeping it down to three to six pictures, with no dialogue, makes sure you get into the habit of ensuring that each shot really counts.

Just like good writing is concise and every word is necessary, so it is with good visual story-telling. If the shot doesn’t add information for the viewer, leave it out.

Here is a blank, six panel template for your practicing pleasure.  Have fun! 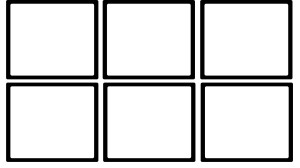