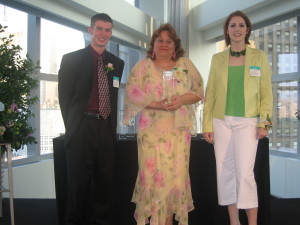 Lorraine Grula and two of her students at the Emmy Awards Banquet in NYC.

In the TV and video production world, winning an Emmy award is considered the pinnacle of success. Emmy awards are given out by the National Academy of Television Arts and Sciences, NATAS.  Or, the “Academy” that everyone thanks so profusely.

With a lot of hard work and creativity, we managed to surprise everybody!

The show was called An Enchanting Holiday and it was a compilation of original comedy shorts, all tied together in a neat package.

IMHO, Enchanting Holiday won because of the awesome story, not because of technical superiority, although it certainly had those traits as well.

When we won the national award, it was a very big deal for such a small town high school. The local TV news did a story, the school board and county commission both gave us medals and three of us went to NYC to attend the awards banquet held at the Time Warner headquarters in Manhattan.

For a high school video production, Enchanting Holiday is extremely advanced.  Some of the kids who worked on it were amazingly adept at video editing and the sheer amount of time we spent working on it, three  months, guaranteed its quality.  Ms. Grula was quite a slave driver of a teacher!

Storytelling is the hardest part of video production and is usually the last thing beginners grasp. Most people new to video focus strictly on the mechanics, like what kind of camera they should use and where they should put the lights.

Video mechanics are all well and good, it certainly helps to know something about video production techniques.  BUT, storytelling is the SINGLE MOST IMPORTANT ELEMENT FOR A SUCCESSFUL VIDEO.

In my opinion, your mechanics can suck but if your story is engaging, people will like your video.

Storytelling is also a lot of fun.

I don’t think any story pops out fully complete.  Stories are built, layer upon layer. That is certainly true in the case of An Enchanting Holiday.   It was created one idea at a time.  Sometimes the ideas surfaced only half baked and I had to prod them to develop the ideas into something more complete.

For example, one story arose from the fact that one of my hyperactive students thought it would be hilarious to take video of a Tonka Truck falling off a cliff.    From that one nugget of a visual idea, we expanded and expanded the story until it was worthy of a national award!

You can read more about how we made this video here.

Thanks for reading Video Production Tips,