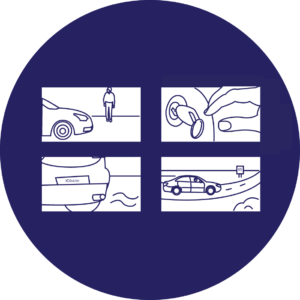 What is a Sequence?
When you take a wide shot, put it together with three medium-shots and two close-ups in order to show that someone made a telephone call or built a chair, it’s called a sequence.

More technically, sequence refers to a series of shots that depict a single incident or happening.  In most professional video production, the shot changes every five seconds or so.  To hang on a shot any longer than that is considered boring.  (This is a generalization of course. I am referring here to typical professional-quality video production.)  So you do not use just one shot of an event, you use a lot.  Editing them together makes it a sequence.

In video, a sequence is analogous to paragraphs and sentences in verbal storytelling. Take eight to ten words, string them together artfully based on the rules of grammar and you communicate a basic idea. String that sentence with other, related sentences to build a paragraph for more complex written story-telling.

In video, you do the same thing with different visuals and it’s called a sequence. Traditionally, most sequences begin and end with a wide-shot. The middle is medium and close shots.   That is not a hard and fast rule of course.

Build your story one sequence at a time.
Multiple sequences are strung together to tell an entire story. Say your story starts with the sequence of a character making a phone call. That sequence consists of six shots.

The next sequence takes our character into the garage to build a chair. The viewer sees a series of WS, MS, and CU shots.  (Wide shots, medium shots and close-ups)

Now, the two sequences can be interspersed…throw in a few quick shots of the phone conversation to remind the audience the character was terribly upset by something.
Then cut to your third and final sequence that shows the paramedics wheeling him out of the garage, DEAD after being asphyxiated by paint thinner fumes. Was it an accident, suicide or murder? Hummmmm, had something to do with that shadowy character on the phone….

Sequences have multiple personalities
Sequences tell a story, but depending on what narration and other storytelling elements you use along with it, a sequence can be made to illustrate multiple ideas. For example, the exact same sequence of an automobile cruising down the highway might be used with different narration to illustrate any of the following ideas:

The same wide, medium, and close-up shots of the same hot sports car, can morph into entirely different stories because of drastically different narration.    If you put narration talking about how people drive everywhere so don’t get any exercise, then the sequence illustrates how cars contribute to obesity. If, on the other hand, you write narration about how cars pollute the atmosphere, then the same sequence could illustrate global warming.

Sequences make great file video, or stock video. If you had access to sequences of different types, you could tell just about any story you wanted.