This slow motion shot of a flying bird was taken with a special camera.  Read on to find out more.

Slow motions shots can grab a viewers attention in a way standard video can not.  Slow motion is a great effect that can be used creatively in multiple ways.

Standard video records at 30 frames per second.  Standard motion picture film records at 24 frames per second.  Virtually everything that moves  goes too fast for that.  If you look at standard 30-frame-per-second video of a rapidly moving object, each individual frame will look blurry.  There is no way to get rid of this blur once it has been recorded.

To get great slow motion video, you have to record at a frame rate faster than 30-frames-per-second. Inexpensive camcorders will not do this, more expensive ones will.

The highest quality way to get great slow mo is to use a film camera with a variable shutter.  To get exceptionally good slow-mo, recording at 1,000 frames a second or even higher is recommended.  How high can you go?

The high-speed photography pioneer Harold Edgerton of M.I.T. shot his famous pictures at speeds of up to several million frames a second.  He used the highest speeds for his atomic bomb shots.  Other shots like the bullet-through-the-apple below were done at a mere hundred thousand frames per second. 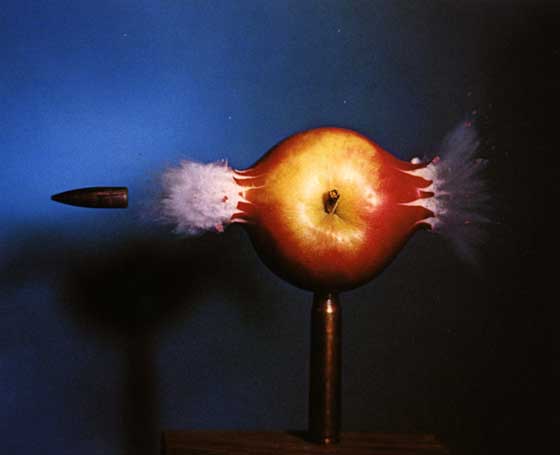 You can get quality slow-mo without going to the extremes of Harold Edgerton.  If you record at 1,000 frames a second and then play it back at the standard film rate of 24 frames per second, or video rate of 30fps, you get a good looking slow motion effect.   Each frame is crisp and clean with no blur.  (Unless your subject is moving AWFULLY FAST.)

Expensive video cameras do allow you to control the shutter.  (The shutter speed and the frame rate are NOT the exact same thing, but I don’t want to get overly technical in this post.)

On all the expensive video cameras I have ever used, controlling the shutter was a simple matter of flipping a switch.   These cameras allowed you to set the shutter at any one of about ten different speeds, up to a pace of 5,000 times per second.   These were $10,000 dollar or higher video cameras.

As technology improves, this feature is coming to less expensive cameras.  The Casio Ex-F1, retailing for just $1,000, was touted as the “world’s fastest camera.”  It was actually a digital still camera that could shoot video.

For still shots, the EX-F1 records 60 frames a second. When shooting video, you can set it to 300, 600, or 1,200 frames per second.  For the price, this is a remarkable achievement.  You will get smooth slow-mo video of most moving objects at these speeds.

The bird video above was taken with a EX-F1.

The EX-F1 came out about a year ago.  Now, things have improved even more and Casio has brought out some new models that are cheaper and smaller.

The drawbacks of these cameras are that you have to have TONS of light at these high shutter speeds.  Plus, the frame sizes they produce at these speeds is small.  These are the trade-offs.

All in all, these cameras are remarkable.  You can buy one from B&H Photo.

Thanks for reading video production tips