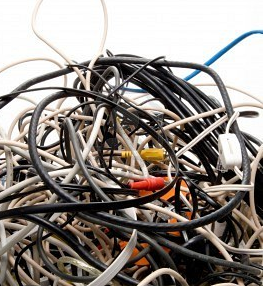 If I were a songwriter, no doubt I’d have written one by now called, I’ve Got The Tangled Cord Blues.

Video production often requires lots of cables and I’ve tripped over more than one in my long career. I tend to view cables as a necessary evil.

Wireless is great, but sometimes lacks reliability. Besides, not everything can be wireless.

Video data transfer is one of those things.

To transfer data from a digital camera to a computer, you need a cable unless the camera operates on a memory card or DVD disc which can be physically placed into the computer. Even then it is sometimes preferable to use a cable. 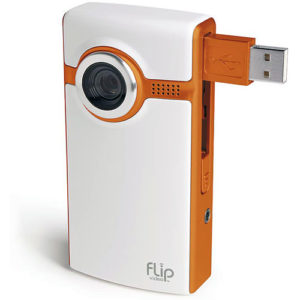 Flip Cameras have a USB2 connector attached so you do not need a cable, which is why they became so popular.

Flip cameras became popular because they did not need a cable, they had the proper connector attached to the camera and it “flipped” out as you can see in the photo.

But outside of those cases, a cable to transfer data to a computer is necessary.

There are two types of digital cables used in digital video production to transfer data.

Firewire and USB-2 Cables (Now up to Thunderbolt and USB3)

If it were not for high capacity cables like firewire, digital editing would still be science fiction. 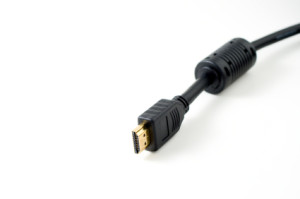 (You don’t want to know how excited video engineers got when high capacity firewire was invented. God loves nerds and so do I.)

When you connect your camcorder to your computer, you use either a fire wire cable or a USB-2 cable. USB 3 cables are now coming on the market.

The two types of cables look and act a lot alike. To make things more confusing, you have different sizes and speeds, which makes the all look just a little bit different. 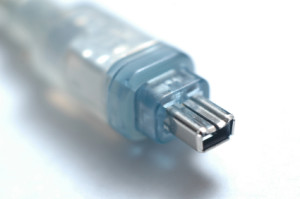 Firewire Cable Connector. Notice the top of this has a slight curve

The way to tell the difference is to look closely at the actual connection piece. All the varieties make it difficult to describe. I’ve posted several pictures, which of course, are worth 1,000 words.

Each has its own symbol, which will be stamped both on the cable connector itself and the port you are to plug into. Bot of those symbols are shown down at the bottom of this post.

Firewires come in more varieties. There are different sizes and different speeds. 4, 6, 9 pin and 400 and 800 speed). Some cables are one size on one end and a different size on the other end in order to accommodate the smaller ports typically found on cameras. We aren’t talking mil spec connectors here; they have to be made so anyone can work them out. This firewire cable is 9 pin on one end and 6 pin on the other.

These cables are, in a sense, idiot proof. (Good thing!)

By that, I mean if the camera requires a 6 pin firewire, a larger one will not fit. All the connectors are different enough so that they do not have interchangeable fit.

Never try to force a firewire or USB. If it doesn’t fit, you’ve got the wrong cable. BE GENTLE! They and the ports they plug into can break easily.

Another tip is to always have your camera turned OFF when you connect it. You don’t want a sudden electric jolt hitting either your computer or camera. So always go slow. Plug it in, then turn it on and open your program.

Usually, if you try to plug a camera into an edit program while the program is already open, it’ll have a hard time recognizing the camera. This is one of the biggest pains in digital video editing! This can mean you have to close out of the program, plug in the camera, and then repopen the program.

Both firewire and USB-2 cable are capable of quickly transferring large amounts of data, which is essential for huge video files. Both are extremely common on brand new equipment. Most computers and camera have both. Higher quality models have multiples of both.

Firewire was originally a Mac-only thing, but today it’s common on PCs and most digital cameras.

Firewire is also referred to as IEEE1394. TODAY FIREWIRE IS OBSOLETE AND INSTEAD THUNDERBOLT CABLES ARE USED.

Be aware that USB-2 and USB-1 are not the same. All new computers should have USB-2, but older ones have USB 1.0 which is too slow and lacks capacity to transfer video. Today, USB3 is the standard.

If you do not have fire wire or USB 2.0, don’t panic. You can buy an inexpensive USB 2.0 or firewire card and install it on your computer. You can also get adapters. The card will include the jack, so make sure it matches with the rest of your equipment.

This is the symbol to designate firewire. 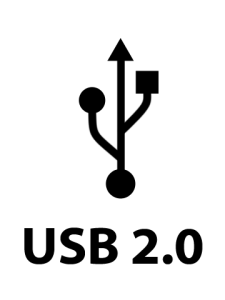 This is the symbol to designate USB2