Here is a 13:13 documentary-style video I recently completed for a local AIDS nonprofit called Other Options. Below is a discussion of using interviews in videos of this nature.

Other Options has performed an amazing service in Oklahoma City for over 25 years and I was truly blessed to be asked to create a video for them.

As with all good videos, it had a purpose. Make money while entertaining and inspiring!

The group wanted it to show at a festive fundraising dinner they had planned six weeks in the future.

They wanted the video to highlight their history, accomplishments, and uniqueness in order to convince anyone watching it was cause worthy of their donations.

I’d never heard of the group before they asked me to do the video, so I was flying blind. Honestly, that is almost ALWAYS the case with with video making of this kind.

Don’t let that intimidate you, but in essence, documentary style video making means you have to become an “expert” on whatever story you’re producing in a very short time. The finished story must reflect your new-found expertise.

In most instances, you are not going to have time to become an expert before you start production so you learn and research all along the way, doing much of it as you actually shoot.

An adapter cable like this can help you use an XLR microphone with a camera that just has a small stereo plug.

PEOPLE INVOLVED WITH THE STORY ARE THE TRUE EXPERTS

The typical way to become expert enough to craft a credible story with your camera is to use interviews with people close to the subject. Then, weave them together artfully with a script written after shooting is complete and then head into the editing phase.

In our one and only pre-production planning meeting, I instructed the groups leader, Mary, to select 5-7 people for me to interview.

She obviously knows her own story best so I left selection up to her. 99% of the time that is how I do it.

I told her the interviewees could be clients, volunteers, donors, anyone she thought would have both the personal knowledge to share AND a willingness to go on camera.

Not just a willingness, but even an eagerness.

I asked her to give me some variety and cover all the specifics she thought were important when selecting who would be best top be interviewed.

SHOOT AS MUCH AT ONE LOCATION AS POSSIBLE

For efficient shooting, I asked her to arrange all of the interviewees to come to one location, at staggered times, to be interviewed.

As this group is a non profit charity, I did this project for the lowest budget possible, therefore I wanted to get as much done as possible in a short period of time. Even if it were a big-budget project, it just makes sense to shoot as much as possible at one location. Changing locations is time-consuming and therefore budget-eating.

The most logical location was the group’s headquarters, which also had plenty of opportunities to shoot b-roll, or video clips that illustrate the story.

So Mary arranged for all the people come to that location on a staggered time schedule.

In between interviews, I also took video of their food pantry with volunteers packing boxes and clients shopping.

To interview all seven of the people, plus shoot all the b-roll, I was there from 9 a.m. to about 6 p.m. That is a pretty typical time frame for that much shooting.

You can keep the budget low by using the tiny modern cameras and tripods. Not only does this make it easy to have small crews (I did this video all by myself) but of course the equipment does not cost much to begin with yet still gets a good image. This is the setup I used. 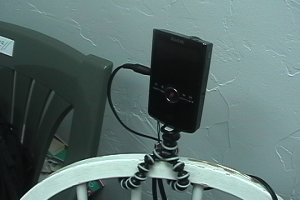 A small pocket cam, like this Zi8, is ideal for low budget video production. Notice the cord plugged in to it; that is for an external microphone. You get MUCH better audio is you use a small lapel mic (AKA lavalier microphone) that is close to the mouth of the person speaking. (8 inches or so)

As you can see from the picture, the tiny, flexible tripod is actually wrapped around a wooden chair! These mini tabletop tripods are wonderful for the small cameras and you can put them anywhere!  Since I use a lavalier microphone that has an XLR connection, I have to plug it into an adapter cable like the one pictured above so it will fit into the stereo mic input on the camera.

After the interviews are shot, they have to be transcribed word-for-word. You need to transcribe them because as you write the script, you will refer back to the interviews a zillion times and you have got to know PRECISELY what someone has said.

Especially when you have multiple interviews that are long, transcribing is a must. No one is going to be able to remember what’s said in the interview well enough to not have to transcribe.

Now, transcribing interviews is the most boring, tedious job in the world so if you can, outsource it to someone who can type rapidly.

Before I write the actual script, I go through the transcripts and highlight the best parts that I think I might actually use.

At that point, the scriptwriting is largely a matter of piecing together small segments of the interviews in a logical way. These interview segments are referred to as “soundbites” in TV production lingo.

The soundbites are woven together artfully to tell the story. Most videos like this make more sense if you add a narrator to transition between the soundbites.

And that, my friends, is the way you tell a story on video using interviews!

The interviews were so good, I was able to make this second version, using nearly 100% different stuff. It all came from the same interviews, I just different portions. I wrote a second script to work with the different soundbites.

This second video is going to be used to promote the Other Options group to a variety of media celebrities.