FIREFIGHTERS HELP US ALL! Does anyone doubt that? Apparently so.

An apartment complex next to mine caught fire the other day. I was relieved and grateful when the fire department quickly showed up and extinguished the blaze. I shot the video above and added some commentary.

WHY I SUPPORT A DEMOCRATIC SOCIALIST APPROACH TO ESSENTIAL SERVICES

Government workers like firefighters, cops and teachers are under political attack. Honestly, I never thought I would see such political vitriol hurled at people who, as a group, are clearly praiseworthy and serve us all well. In short, they make society a better place.

Although I understand some of the frustrations, I think it is a HUGE mistake to vilify these groups as some on the right end of the political spectrum are doing.

I believe the end goal is privatization of the public entities that form the very framework of our nation. Not because they are inspired by some nobel political philosophy designed to make the world a better place. No, I think that is the just the cover story for plain old fashioned greed.

I also believe it would also be a huge mistake to privatize these public sector industries. There are a multitude of advantages in having these tasks as part of the government and not the private sector. 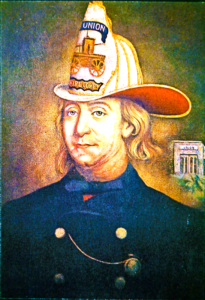 I contend that the entire tactic is really about union busting, not balancing budgets as they claim. Union busting would not only make the elites happy, it would deprive the democratic party of one of its largest dependable donation sectors, unions.

THE MYTH OF THE “LAZY” GOVERNMENT WORKER

All-in-all, in my experience, the vast majority of government workers do a fantastic job. Not all of them of course, but most. Their jobs are incredibly important and serve us all with increased public safety and a population that can read.

As a former TV News photographer, I worked alongside many firefighters and police and was always impressed by how hard they worked, for little pay.

After I left TV News, I worked for two years in a school system as a high school video production teacher. I can attest first hand to how many hours that job took! Teachers work extremely hard.

Could our schools be better? Of course. Are some teachers bad? Of course.

Is it the fault of the teacher’s unions? No.

Some situations involving teacher unions can be frustrating for sure. But in my experience, the teacher’s union was necessary where I worked to stand up to a principal who was truly psycho. I’d have to say out of the many psychos I have known in my life, she was one of the absolute worst. The townspeople finally started a petition against her after she locked a 10th grade girl in her office, demanding that she sign bogus papers claiming a male coach had sexually abused her.

This principal brought bogus sex abuse charges against several men and fired about 25 teachers in one year, most on crazy, trumped up charges. That was her style, to accuse people of grossly exaggerated stuff. I was one who got the axe but they hired me back later after she was gone. She was finally fired after a long battle between the parents and the school system administration. Without the help of the teacher’s union, this principal would have caused more unfair and unnecessary turmoil than she did.

I offer that story as proof that as with anything, teacher unions accomplish a lot of good that you’ll never hear about from union detractors. Are they perfect? No, of course not.

The movement to destroy public ed and other public utilities has a lot of strength behind it. They spend a lot of money creating one-sided stories about situations that make teachers unions look bad in order to sway public opinion toward union busting.

I say let’s improve the system we have, but please don’t throw the baby out with the bath water! The schools need improvements for many reasons, teacher’s unions are just a small part of the issue.

Public workers should be appreciated, not vilified.

IT’S ALL THEIR FAULT!!

The right wing in this country has decided to blame economic problems on government workers. Honestly, I find that so absurd as to be laughable.

They claim that overly greedy private sector unions are bankrupting government and caused the 2008 crash.

That’s not only untrue, it’s also a bad case of scapegoating.

Corruption on Wall Street and within the banking/financial industries, along with corporate control of our government, is what led to the 2008 economic crisis, not firefighter pensions! People who put their lives on the line deserve to have their futures secured, be it with help from SoFi or, more ideally, from the government!

But some folks at the top want you to think Wall Street and the banks are A-OK, it’s those dang unions that are screwing us all!

Blaming unions is a diversionary tactic to take our minds off Wall Street’s shenanigans while at the same time casting aspersions on the long-hated unions. (Hated by the money folks, certainly not hated by the average Joe or Jane).

Wall Street and the banks should be investigated to the fullest but that isn’t happening, although I hear of a few efforts here and there. This is because way too many members of Congress need the big money guys to continue funding their re-election campaigns.

Since Wall Street and the banks control so much money and power, they seem to be able to get away with most anything, including casting blame where it does not belong.

Some in the media, mostly Fox News and right wing radio, have done a great job of convincing people that lazy government workers and their overly demanding unions are bleeding government dry.

I am certainly not saying unions don’t have some issues, but the truth is, our government is going broke because of too many overall commitments compared to revenue streams and military spending that wasn’t budgeted.

The rich folks have ALWAYS wanted to destroy unions. Unions are a thorn in their side because unions demand that workers be given a fair wage and decent working conditions.

The video at the top of the page was made to share my ideas about WHY I think it is important to support firefighters, government workers of all kinds, and their unions. The video came about after a huge fire hit an apartment complex near where I live.

The ultimate goal of the right wing is to PRIVATIZE everything. They argue that a commercially run fire department or school system would be more efficient than our current public systems.

Although the arguments can seem compelling, I believe the facts paint a different story.

Let’s use for-profit colleges as an example. These are a fairly recent invention and can be easily compared to their public and private, non-profit counterparts.

Many for-profit colleges have shown to do a poor job educating and training their students. Students drop out at high rates, and if they do graduate, they carry heavy debt yet often do not have the skills needed to get a good job.

This is because compared to their public counterparts, for-profit colleges tend to funnel way too much money into executive salaries and marketing and not enough into actual education, in spite of what those high-dollar ads claim.

Not ALL for-profit colleges are bad, but plenty of evidence is showing that most are, way more so than public colleges. A recent report by Senator Tom Harkin called the amount of evidence “overwhelming.”

These problems are also not isolated to for-profit colleges, but those schools have a much higher incidence than public schools by far, as the Harkin report and this blog post by Bill Moyers describes.

Whenever profit becomes the largest, if not sole motivator, quality tends to take a back seat behind greed.

The CEO of a private for-profit company will demand a much higher salary than a public counterpart would ever be allowed.

If we were to rely on commercial firefighting units, what happens when someone is late with their bill? No pay, no protection. This does not just harm the one who neglects to pay. This harms their neighbor, whose house catches on fire while the fire department is busy counting beans.

What happens when rural areas with limited populations are not protected by the commercial fire department because it isn’t cost-effective? Do those fires burn and spread?

What happens when poor neighborhoods are not protected because it won’t generate high enough fees? Do those fires burn and spread?

I do not have faith that free market dynamics will solves these sorts of issues.

Government, on the other hand, is for ALL the people, so profit is not the sole motivator. Government services work for everybody, which is to the benefit of us all!

Not only are we all covered by governmental fire and police protection, it is also true that when these tasks are publicly held and operated by the government, we ALL (theoretically) have a say. Granted, the conversation can get confusing and frustrating, but all of us have the right to participate.

Private corporations don’t give a toot about your opinion. If all the schools and firefighting units are privatized, you will lose your right to have a say. They will charge more and provide less.