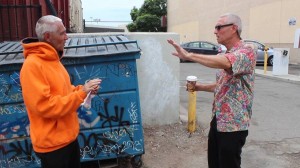 Split screen is a technique that essentially adds two shots together to make one.  This special effect is often used in order to have one actor play two parts.

As you can see in the adjacent picture, the same actor is playing two characters, one is supposed to be him from a future time.  He is seen talking to himself by the use of a split screen technique.

With the split screen technique,  you first have to shoot it properly,  then you add the two shots in editing. 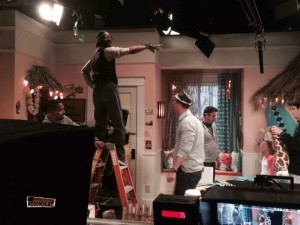 Andre Campbell, seen here on the ladder, at work during a production for Nick at Night.

My friend Andre Campbell, who works in film and video production out in Hollywood, recently did a show with split screen.  He wrote this article describing everything you need to consideration in order to get a good split screen effect.

On our scout, we found locations for the split screen shot. We actually looked for some straight lines in the wall in the background and on the ground that we could use as, you guessed it, straight lines where the split of two images will later converge in editing. Think of them as guides.

This was to be done in a wide shot, or a fifty-fifty shot.

When we shot for the split screen, we had the camera locked down on a tripod.  If you don’t lock the camera, when you try to match up both shots in the middle, you could have a problem trying to make it look seamless.

You don’t have to start with the camera locked. You could pan to, or with, the actor to get into the scene. 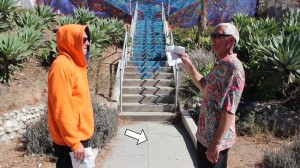 We worked with marks on the ground for the actor not to cross over to help with the split screen. (We used tape, ground debris, cracks in the ground or that indentation in the cement.)

In both of our split screens shots, our actor as one character would reach out his arm towards the center of the screen, toward the other character on the other side. So during rehearsal, we marked things so we would know where everybody has to be on both sides of the screen. Rehearsal is always an important to minimize mistakes.

Rehearsal in this case includes your crew person reading the other character’s lines for the scene and timing it out. The crew person acts as an ‘eye line’ for the actor.  We had him wear the same orange hoodie as the character would wear.

If you have a remote control for your camera, then it is best to use it to stop and start the camera from rolling.  If you use your finger and push the on/off switch, be careful that you don’t slightly jar your camera.  Doing so will ruin your soon-to-be-stitched-together split screen shot.

The split scene is done several times (Both sides of frame.) so we can have lots of choices i the editing room to work with. Watch your footage and grab the best performance from each side to work with.

Be aware that sometimes you may need to take a lower performance so things line up right in editing. 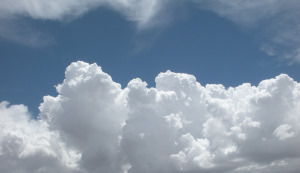 If you shoot outside and have to wait for the actor to change over to the other character; don’t be surprised if something changes, like a cloud coming in front of the sun. You would need to wait for it to move, then start rolling and shoot.  Everything in the shot must look the same or the effect will not seem real.

If you have to shoot no matter what, when you get into editing, you may see a color shift in your split screen effect.

When you put them together you will have to “Color Correct” for this. You want to match both screens left and right to look like it was all shot at the same time, at the same moment; under the same looking lighting condition if possible.

Shooting indoors gives you better light control. My D.P. (Director of Photography) suggested that we make all the scenes outside, so we don’t have to light anything. (For speed) Remember, we’re on a time crunch. Maybe use a bounce card or two outside.  Unless it is a cloudy day, and it stays that way for that split screen shot, then just be aware you may have some real color correcting to do.

Note: From my early days of shooting, ‘color correcting’ was a term used when you made a mistake shooting. If you didn’t properly white balance the camera, you may have end up with a blue tint, you had to adjust the colors.  Today if we shoot cleanly and expose correctly we have great looking footage. So, what we may do is “Color Enhance” parts of the footage. My D.P. comes over and likes to refer to it as ‘Color Timing.’ And then there’s ‘Grading.’

We did some re-shoots and we had to match the color for two different days shoots, sometimes sunny and sometimes overcast day. We had an orange hoodie which we wanted to look the same color in all shots by matching them all in Adobe Premiere.

You try to get as close as you can in color, and you do the best you can. Some third-party programs can do a more efficient job of doing this.

We are using Adobe Premiere 5.5 to edit the short. We looked at all the footage and decide on two clips to use; one for the left side and one for the right side. The guy from the future is on one side and the present day guy is on the other side.

The left sided actor video clip was put on the bottom video track 1. (It could have been placed on the top track.) The right side actor clip was on video track 2 above it. We used the “Crop Effect” on the top video clip on track two.

The crop effect allows you to crop from the top, right, bottom or left side of the video clip, exposing what is bellow it on the timeline.

Note: If you have a boom in your shot, you can crop down from the top to cut it out, and then select the Zoom Box in the effect panel of the crop effect.  The image will then fill the screen with a little stretch and hides the boom. You can do this with the motion effect with some tweaking also; Premiere and most video editing programs, allow you to to do things more than one way. Find what you are comfortable with and what works for you.

We cropped from the left to the right showing us the other character on the track below. That is what we wanted. This exposes the video clip below it from the left. You are allowed to dial in your crop line with number percentages, or lay your cursor on top of the numbers; it changes to a hand with a finger pointing up with little arrows pointing left and right. Now, left mouse button click on a PC and hold, then slide left or right and you will see the number percent change as the crop line is moving in the program window.

When we first did it, it was a noticeable color shift of both clips. (The clips did not look alike color wise, when compared side by side. Not a major difference, a slight one.) That was sort of good, as it allowed us to see where this line split was moving. But we had a little work to do color wise. 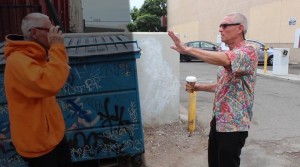 If you have perfect clips and you want to see your line, you may need to add a “Temporary” Opacity change, right there in the effect window. Tweak the clip with the opacity and you make that crop line more visible as it slides left and right. This was added to the bottom clip and it got darker. When done, take off that effect to hide your line.

Remember, not everything is as we plan. But we hope. The crop effect gave us just a hard straight up and down line. (In most cases this will work.) We wanted to use the edge of the trash bin, but it was on an angle. (We did think about the wall behind with its edge.) We used the line on the sidewalk at the steps for the other split screen line guide. 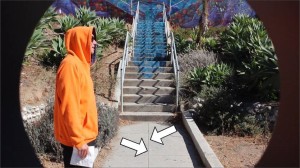 The crop effect was limited here for us, so we deleted it and went with the “Linear Wipe Effect.”

This effect gives you somewhat similar results except, you can make the hard straight up and down line that you see in the crop effect tilt! This wipe effect can wipe on an angle.  The trash bin edge tilted to the left and we needed a tilted line.

Using the ‘Transition Completion’, twirl down the arrow to see a slide bar, move it and you will see a line going left to right. (You may have to flip-flop clips to get desired wipe.) Move it to the middle or on an edge that you like. We use the edge of the blue trash bin. You can dial it in with the number percentage to be more precise to your line. 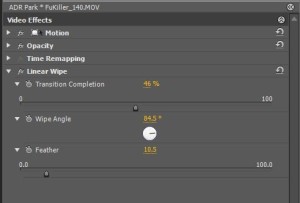 Once we got to the edge of the bin, we twirl down the ‘Wipe Angle’ triangle. You can grab the little clock-like arm of the dial to move the percentage of the angle of your line, or you can dial it in with what numbers works.

We tilted the line to the left to follow the edge of the trash bin. Then slid it back and forth to find the trash bin line, and then a little more tilt by dialing in the numbers. You can do whole numbers and half numbers, like 34.7% to fine tune it.

Tweak away till you get the line where you like it. Now what’s neat about the last twirl down, the ‘Feather’ effect, is that it takes your up and down wipe line and feathers it, or softens it, for a nice look if you need that.

Once you get your line and you make sure both pictures looks the same you can then export it out of premiere as one meshed or flatten clip to use in your final edit. You now have your split screen. Or you can just leave it on the timeline with what effects you have on both clips.

When videotaping your actors, you can shoot them head to toe or push in for a tight shot, depending on their physical action. With a good split screen shot, you can cut back to it any time in your film. All it takes is a little preparation, a little know how, trial and error, and you can have the split screen that will make you proud and a happy camper. And you won’t’ have to go cray-cray.