The Sony ECM 44B Lavalier Microphone is an extremely common, sturdy, functional lavalier microphone that comes in on the lower end of the pricing scale.   If you are looking for a high quality mic for video shoots, but are still budget-minded, the Sony ECM-44B is a good choice.

Currently it sells for $156 at B&H Photo Supply. 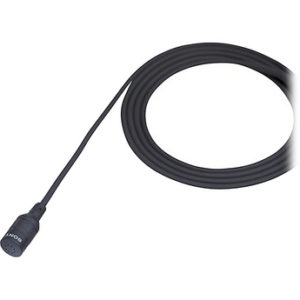 The Sony ECM 44B Lavalier microphone is extremely popular because it is so reliable and durable.

The Sony EMC 44B  is so common in certain circles of the professional video production world that you might get the impression that  it’s the only mic of its kind but of course it isn’t.  It’s popular because it does a fantastic job yet doesn’t break the bank.

This is a lavalier microphone, which means it is a small mic that is clipped onto someone’s collar.  Lavalier mics are good for video making because they essentially disappear in your shot.  The best mic to use for a person speaking on camera is a lavalier.

An adapter cable like this can help you use an XLR microphone with a camera that has a stereo plug instead of XLR inputs.

Phantom Power does not involve ghosts!

One reason why the Sony ECM 44B is inexpensive is because it relies on one AA battery for power.  Keeping it battery powered and not turning it into a *phantom powered mic helps keep the cost down.  Using a AA is certainly not difficult or limiting in any way.   One AA will last a very long time inside the ECM 44B so you do not have to worry about a huge battery budget.

*(A phantom powered mic is one that draws its power from the camera it is plugged into.)

The SONY EMC 44B microphone is very durable and provides clean sound.  I’ve used them for years and never had one break on me.  If your battery power is weak, your audio signal will be too so it is important to always have head phones so you can listen to your sound as it is being recorded. In my experience, with regular use, the AA needs to be changed about once a month. I always carried spare double AAs because when the battery gets weak, it needs to be replaced immediately.

This shows the duel XLR inputs on a camera.

Please keep in mind that not all video cameras have inputs for microphones and the smaller ones that do, have a stereo plug, not an XLR. If that is your situation, you can use an adapter cable that can be purchased at any store that sells microphone supplies or B&H Photo Supply.