Broadcast quality video production is easier and less expensive today than ever before.

A basic definition of “broadcast quality” could be a show done with multiple cameras and microphones, (or edited to look that way) along with chroma key and other digital video effects.

Thanks to high-powered computers, creating such a video can be done with a minimal amount of equipment and therefore a minimal budget.

Gone are the days when you needed a huge studio or editing suite filled with thirty or forty components run by ten crew members at a budget of five-million dollars.

One powerful computer with the right software can replace a good deal of those components and consolidate most every task inside of one computer.

That saves not only tons of money but tons of room. You can get by with a MUCH smaller space if you don’t need all that stuff.

This makes videotaping in remote locations easier and more practical. So even if you are way out in the boondocks, broadcast quality video production takes less money, less space, less equipment, less personnel, and less effort than ever before.

Of course, you can also put the same equipment in your basement and still have room for the pool table. 🙂

There are a growing number of different software choices that essentially turn a high-powered desktop computer into a very compact TV and video production studio. 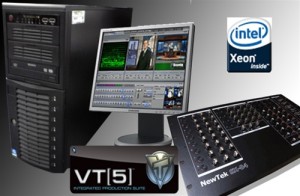 One solution for setting-up a desktop video studio is the VT5 by NewTek. The video on this page shows you a VT5 in action.

It runs a bit under $9,000, and that does not include the actual computer. The VT 5 includes a huge video card, a breakout box, various converters and accessories.

In addition to the VT5, a complete operation will need cameras, mics, lights, monitors, play/record decks, and cables.

NewTek has been developing innovative digital video editing solutions for a very long time. The VT line has met with great success.

How well I remember New Tek when they first came out with their revolutionary Toaster. Baaaaaaaaa! (It had a fluffy sheep wipe! Honestly one of the most useless digital effects I can think of. But it was cute!)

A longtime working buddy of mine from my TV News days today operates a remote mobile production van that uses a NewTek VT5. The van is owned by the country government. He works as their Video Production and Studio Manager. The county uses the Remote Production Van to create incredible, high-quality shows of county sponsored events: parades, fairs, school events like graduations, dedication ceremonies, and sporting events. The van stays busy.

My buddy, Newt Danley, was nice enough to show me around the van and describe how he has the equipment set up. I made a video about it for my readers here at Video Production Tips. The video shows you what it takes today to create videos that rival what those in the big leagues have been doing all these years with their huge budgets.

If you are interested in studio-quality video production, whether you want to stock a mobile production van for remote locations like my friend Newt, or use the same equipment to set up a stationary studio, the NewTek 5, or a similar unit, is one of the best ways to do it.

Below, I have copy/pasted some sales copy off the NewTek website, giving the product’s features, requirements and specs. Below the NewTek copy, I have put a list of additional equipment Newt uses in the mobile production van.

Now go forth and make video!

The VT 5 Live SX-SDI Bundle from New Tek is designed to function as a complete television control room for your desktop. It is intended for use in live and post-production video studios. This model also includes the 8-input SX-SDI switching breakout box.

It supports NTSC and PAL standards. Other features include network-style, live, virtual sets and specialized tools for high-end post-production work. It offers (24) inputs with hundreds of real-time transitions and 3D DVEs. The solution also includes a character generator, a 2D video paint and animation system, real-time keying, and a digital disk recorder for integration of captured video clips.

Some of the benefits and features you will gain with this system include:

NewTek’s proprietary LiveSet™ system in VT[5], allows separate virtual sets to be assigned independently to all switcher inputs, including all cameras and DDRs. In addition, each input has an independent LiveMatte™ matting module that eliminates the need for expensive hardware for each source connected to the system. Each virtual set supports virtual cameras with multiple angles and zoom levels, with support for secondary video sources for on-set virtual monitors.

All effects are rendered with unprecedented photo-realism, including reflections, refractions, shadows, bump maps, and sophisticated filtering.

Additionally, the advanced new keying capabilities included in the LiveMatte™ technology enable refined previews of mattes for the precise isolation of color, edge and spill for the sharpest possible results.
Features

LIST OF ADDITIONAL EQUIPMENT IN THE MOBILE PRODUCTION VAN HIGHLIGHTED IN THE VIDEO. When the video quotes a budget of around $30,000 for the whole set-up, it includes the monitors, record decks, etc in the following list. $30,000 does NOT include the van itself.
Preview monitors-2 racks of 4 each. Datavideo TLM 404 4- inch monitors (Only one set of 4 was installed when we shot video).Computer monitors-2 Marshall V-R151P rack mounted 15 ” monitors.Program monitor-One Magnavox 15 ” free-standing monitor bolted to metal shelf.VCRs-One Panasonic SD-255 (main)DVC Pro: One Panasonic AJ-D230H (back-up)DVC Pro Slo motion- One Panasonic PV-HS2000 (three at time of taping. )Audio mixer-Australian Monitor(brand name)TX6000 (small, rack mounted)