For many novice video producers, lighting causes lots of worry and seems very complicated.  Lighting for video production CAN be complicated, but it certainly doesn’t HAVE to be.

I specialize in making video as easy as possible while still maintaining a professional look.  I can sum up everything you need to know about lighting in just three bullet points:

If you learn the meaning of these three concepts, I promise your lighting efforts will improve tremendously.

We’ll start with the first two points.  They are related.

Light comes in two forms, direct and diffused.  Direct light is harsh and scary looking while diffused light is soft and flattering to the face.

The picture above has relatively direct, dramatic lighting.  The picture below has soft, diffused lighting. 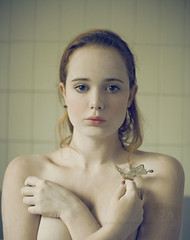 If you remember elementary school physics, light rays always travel in a straight line.  Imagine yourself outside at night with a flashlight.    You can see the entire beam of light and it is straight.  If you want to illuminate an object, you have to shine the flashlight directly on it.   This is an example of direct light.  It travels in one direction, straight as an arrow.

A standard, incandescent light bulb is painted white on the inside in order to diffuse the light.  The light beams hit the white paint and bounce.

Another prime example of direct and diffused light is to think about being outside on a cloudy day or a sunny day.  On a bright, sunny day you have direct light.  There are lots of deep shadows and the shadows have distinct edges.

On a cloudy day, the clouds diffuse the light.  If it’s cloudy enough, there will not be any shadows at all.  Since the light is bouncing around every-which-way, any potential shadow is filled in by the bouncing light and eliminated.

Generally speaking, you want DIFFUSED light in video production.  Unless you are doing a monster movie, diffused light will look best.

Most of the gadgets that come in a professional light kit exist for the sole purpose of diffusing the light. If you do not have a professional lighting kit, you can achieved a diffused effect by pointing your light toward the ceiling or wall and bouncing it.  Do not point it at the on-camera talent.  They will thank you for it.  Not only will it make them look better, but it will keep them from squinting and being dreadfully uncomfortable. 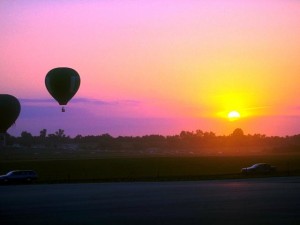 Now let’s talk about the third bullet point.  What DIRECTION is the light coming from?

Is the source of light in front of your on-camera person?  Behind them?  To the side?  Behind?  What direction the light is coming from will have a huge impact on how it looks.

Generally speaking, you want the light source to be in front of, or to the side, of your on-camera talent.  You do NOT want it behind them unless you are trying to hide their identity.  Light coming from behind will create a silhouette.   Video producers usually reserve that technique for sleazebags who want to remain anonymous.

This is a mistake I see frequently.  People will stand right in front of the window thinking that the light coming from the window will add enough light to make their shot look good.  It probably would, IF the on-camera person stands so the light falls on their face and not on their back.

I produced a video tutorial for this page that explain these lighting concepts and give demonstrations.  It might be easier for you to understand since I am able to show you what I’m talking about instead of just describing it.

As always, drop me a line if you have questions.