In your interested in teaching video production to children, watch this 8:50 long video. It shows a class of elementary school students in a video production class I taught during summer school. In just one week, each class created an original video. I think that classroom capture videos like this can have a great impact on people’s education, and there are actually many higher education institutions that provide a lecture capture platform that helps students to learn at their own pace. 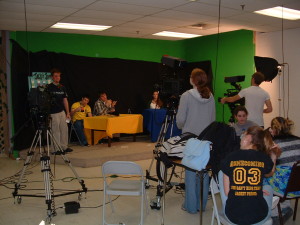 Learning to make video is one of the best activities for kids that I know. Having taught both high school and elementary school students TV Production, I can say with certainty that participating in the process of video making builds children up in a wide variety of ways.

What kids gain from video making goes way beyond what one might think. It certainly goes beyond learning skills that can someday earn them a living, although that indeed is one of the benefits. This post is dedicated to the many people who write to me asking questions about school video production classes and how to teach video making to kids.

Video production is, by and large, a group activity. Nothing much gets done if the group can not act as a team! I doubt if anyone who has ever nurtured children would argue with the fact that learning cooperation and teamwork is an incredibly important skill to develop. The younger the better!

Parents often turn to sports for giving teamwork experience to children. I am a big fan of that of course, but video production is another great avenue most folks never consider. Some of my most successful student video producers were kids who were not athletic, so video was one of the few ways for them to succeed on a team!

These are my first-year High School Video Production Students taping a project in class. As you can see, our “studio” was not fancy but it was functional.

When making video, the goal of course is to complete a finished show. When I took the kids through the process of deciding what to create, we began with the end goal in mind. What kind of show did they want to make? Funny? Dramatic? Realistic? Fantasty? Decide that first.

Since video making is a process, there are lots of little goals along the way. So when I teach video production, I make sure everyone realizes what small goal we are working on at the moment. Reaching all your small goals one after the other leads to reaching your large goal in the end.

The creative possibilities with video are endless! Kids always blossom when given creative ways to express themselves. With video making, they have the opportunity to get creative on so many levels: writing, acting, lighting, costumes, the list is long.

If they don’t already feel creative, you can show them the process I outline for video storytelling and their creativity confidence will grow by leaps and bounds. More of the process is outlined in this post about my experiences with teaching high school video production . 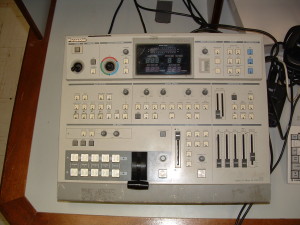 This was our video switcher at the high school that we used for live productions. It was not the greatest of course but it worked. 🙂

We live in a tech-oriented world. Without a feeling of comfort and familiarity around technology, a person is sunk! Video equipment is a relatively easy way to become familiar with the gadgets and gizmos they will encounter in all phases of life. I do suggest you start slowly though. I personally do not think it’s a good idea to give a 3rd grader a professional video camera or an audio mixer with 125 inputs. Let them learn the basics with SIMPLE equipment; that is technical enough for beginners. You do not want to create a feeling of overwhelming expectation. That can be counterproductive. They will get there eventually, you just need a little patience.

With video editing, kids will learn all kinds of computer skills, many of which can easily be translated into other computer programs. When they get to the point where they can potentially create an audio adjustment layer Premiere Pro, they’ve most likely developed a deep understanding technical skills. Editing was not something I did with my elementary students, but my high school students sure loved it.

READING AND WRITING SKILLS: Watching TV often gets blamed for lowering literacy. Well, MAKING television instead of just watching does the opposite! As a mommy, I was a HUGE fan of reading over television. As a high school video production teacher, I thought my class probably did more to teach kids reading and writing than just about any other except language classes. Virtually all videos require a script to be written. Often, those scripts need to be read aloud on camera. Reading and writing are integral parts of the process of creating video. So teaching video production is a FUN way of getting kids interested in reading and writing.

One of the easiest formats of TV show for kids to produce is a “newscast.” Lots of schools have students read the daily announcements for content. That’s easy, but I always felt like we should do better. I was always on the lookout for articles I thought they’d find interesting or amusing. But I didn’t spoon feed them! I had them research online stories then rewrite them into concise news copy. It was a little bit like writing mini term papers. Some in-depth projects they did required multiple sources. 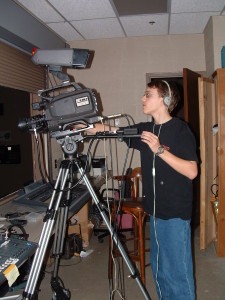 Not only are people skills a large part of the teamwork involved with making video, but people skills also come into play with any video that requires interviewing people or videotaping outside of the classroom. Interviewing was a staple of all my classes. We interviewed each other in introductory lessons. Everybody got a chance to be both the interviewer and the interviewee.

We did some with ourselves as real people. I also let them come up with people they’d like to be and then do the interview pretending they were those people. That was fun! For advanced students, we often had guests come in or a crew would be sent out. This required advanced planning, telephoning, and scheduling.

Then it was necessary for the students to instruct the people on what needed to be done and explain how they are going to go about it. To use a Hollywood term, they were directing! So teaching video production provides great experience to gain leadership skills.

Teaching video production is a fun way for kids to get artistic and explore different ways to create something out of nothing. You’ll see in the video how we used plastic crates doomed for the trash as boats!

As an adult professional, I believe there are few skills as beneficial as poise. Even if one never gets on stage in front of an audience, what about all the job interviews and other instances where it pays to have poise? Teaching video production is a great way for them to gain poise and become confident presenting themselves.

Interacting with confidence and style helps no matter what field you’re in. Being on-camera develops these skills probably better than anything. Not that you can assume your little stars won’t ever be criticized. That happens! As teacher, I helped them deal with it. I helped them realize that they could NEVER satisfy everybody, nor could they ever be perfect. IMHO, learning those simple lessons is a huge leap in maturing into an adult. So teaching video production includes those kind of valuable life lessons as well. 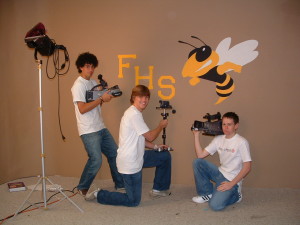 This group called themselves the SWB Crew and they were some of my best students. Today, one of them is a national award winning wedding videographer

So many of my students gained remarkably by learning to make videos. It was very gratifying to watch them mature, gain confidence and grow. Some students went from being shy, insecure nobodies to becoming studs on campus because their videos were so popular!

Another aspect I loved about teaching video production was that many of these students were not successful with regular school work, but they shone bright as gold in my class!

When you take a kid who has been labeled “special needs” by the system (which translates into the horribly insulting “retarded” to other students) it was was nothing short of a miracle to see them thrive as video makers. And thrive they did. I saw multiple cases of total renewal. Kids who absolutely HATED school loved video class. It even kept a few from dropping out. Video Production was a class loved by virtually everybody. It appealed to kids of all types.

Now occasionally, I would hear an adult say something cynical like: “Teaching video production in school? Too much TV is the problem! Isn’t school supposed to keep them away from TV?” Although I understood what they meant, I had to explain that MAKING TV and WATCHING TV are two separate things! Making TV is one of the most beneficial tasks you can teach a kid IMHO! Not just for the reasons outlined above. I also taught them to be critical evaluators of everything they saw. If they are going to be bombarded by TV, isn’t it a good idea to make sure they aren’t bamboozled by it?

PERSPECTIVE ON THE WORLD AROUND THEM

One of my favorite assignments was to show them old videos like Martha Rae or Rosemary Clooney singing on The Red Skelton Show. Then I’d have them do a compare and contrast with any modern day singer. It didn’t take a genius to realize the old gals wore more clothes and actually knew how to sing! Now how’s that for a history lesson?

I actually had them watch lots of old shows. I thought this gave them a perspective on the world and showed them life could be very different from what they personally experienced.