THE ORIGINAL VIDEO USED HERE IS NO LONGER AVAILABLE.  IT WAS JOHN CHOW TALKING.   THE AUDIO WAS AWFUL.  THAT IS ALL YOU NEED TO KNOW ABOUT THE VIDEO TO UNDERSTAND THIS POST WHICH IS ABOUT HOW TO GET GOOD AUDIO.

My Blog Business Model from John Chow on Vimeo.

There are lots of reasons why I am posting John Chow’s video on how he makes forty thousand bucks a month blogging here Video Production Tips.

One, is because the information is stop notch and something of great interest to me and my readers here at VPT.

Second, is because in spite of the quality content, most of the comments were complaining like crazy because of the poor quality of the audio and video.

Many of them said they refused to watch the video because they could not understand what Mr. Chow was saying.

That’s sad, but entirely predictable.  Crummy sound is such a turn-off.  Very few viewers will bother to strain their ears to try and decipher bad audio.

People are more forgiving of poor quality video, but not much.  I also found several comments critical of the poor lighting.

One disgusted and impatient person went so far as to say that if Mr. Chow did not know how to light or mic a video, he had no credibility.    None.   On any subject.   So this person completely blew off the incredible information Chow had to offer simply because the audio sounded crummy and the lighting looked bad.

That is extreme to say the least, but quite common and does not surprise me.

I’ve said it a million times but I will say it again.

IF THE TECHNICAL QUALITY OF YOUR VIDEO AND AUDIO SUCK, PEOPLE WILL NOT WATCH IT AND YOU WILL LOSE WAY MORE CREDIBILITY THAN IS FAIR.   AUDIO QUALITY ACTUALLY IS MORE CRITICAL THAN VIDEO QUALITY.

How to Fix It?

The quality of this video could be improved dramatically if the folks shooting it has used an external microphone plugged into the camera and placed close to Mr. Chow’s mouth.

Or, an even better option, would be to plug into the sound board being used at the conference.  This way,  you record a direct audio feed.  Doing this usually requires a small adapter to knock the audio level down about 50 decibels from a line level feed to a mic feed level.  I have heard this magic gizmo referred to as an audio resistor, audio pad, line level adapter and decibel pad.  An XLR pad is about the size of your index finger.

Either one of these options would require a camera that has an input for a microphone.  Tiny, cheap video cameras DO NOT have an audio input.  Better cameras do, and this is exactly why a mic input is a critical feature to look for when buying a camcorder.

Audio inputs will either be a small stereo plug (less expensive) or an XLR audio input.  (more expensive.)

Whatever kind you have, make sure your microphone plug and your camera match.  If not, adapters of all kinds are made and you can find them at stores like Radio Shack.

For a situation like Mr. Chow was in, at a large conference, a wireless microphone would be preferable so you do not have to lay a cable on the floor where people are walking.  If you HAVE to use a wired mic, avoid lawsuits by duct taping down your cable. 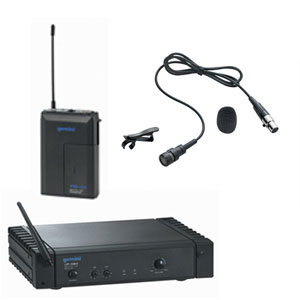 A wireless microphone uses radio signals to transmit sound so it does not need to be plugged into the camera. Eliminating the audio cable between the speaker and the camera is very handy in many situations.

The Chow video was recorded using only the microphone found on-board the camera. Obviously it was not enough.  It picked up all the hums, coughs, and mutterings of the audience and the air conditioning system.   All that drowns Chow out.   The very best solution is to use a wireless lavalier microphone pinned onto his shirt about six inches from  his mouth.

But outside of buying a bunch of expensive new equipment, they still could have recorded better audio if they only knew how!

THEY COULD HAVE MADE IT WORK IF ONLY…….

If they were completely stuck with no other options but the small camera with no mic input, it could have worked better if they had gotten the camera and the mic MUCH closer to Mr. Chow.

The camera was clear at the back of the room and that distance is just too great for a mic like that to pick up well.  If the camera had been 3-4 feet from him instead, it would have picked up fairly decent audio.  Not great, but better than what they got.

Fixing the lighting is not nearly as critical, but doing so would be easy.  One diffused light, about 5 feet from Mr. Chow, pointed directly at his face, would light his face well but not overpower the screen behind him.

The video is quite long, nearly one hour.   I watched the entire thing and enjoyed it.  I think your ears adjust to bad sound and after listening for a while, it becomes easier to understand.   The information is top notch and I can only hope that Video Production Tips someday makes 40 grand a month!