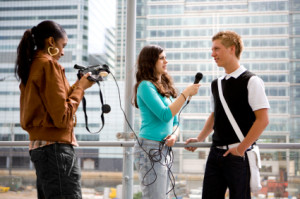 Nothing marks a video as amateur more quickly than a wildly moving camera.

WHEEEEEEE! Zipitty-do-dah! Gosh-darn-golly-gee willikers, this is a toy that MOVES!

Yes, it moves. That doesn’t mean you should move it.

The single biggest mistake virtually EVERYONE makes when they first get their hands on a video camera is to move it every which way as quickly as possible.

I confess to doing it myself oh so many moons ago and being laughed at by my teacher. Like everybody else, I confused the camera with my eyesight and brain.

Trust me; even the most expensive and sophisticated camera is nowhere equal to the combination of human vision and your brain. Even if you don’t have much faith in your brain, (mine sure ain’t the best) please believe me when I say your brain and eyes together are ten million light years ahead of human video technology.

As you move your head around to look at your surroundings, things appear normal and natural. Your brain actually erases a lot of your head movement but no one ever thinks about that. Your brain rather magically “cuts” from static view to static view and all that crazy movement is largely unnoticed.

If you move the camera in the exact same manner you move your head, you will get video that induces sea-sickness.

The solution is to HOLD THE CAMERA STEADY.

My high school TV production students used to argue with me constantly over this. They thought a wildly moving camera displayed their true creative genius. I told them to go home and watch TV. (Who can argue with a teacher who gives assignments like that?)

If you observe carefully when you’re watching TV, you will notice that 90% of all shots are locked down steady on a tripod.

The camera does not move. The action moves within view of the camera.

If the view needs to change significantly, the director will choose to cut to another shot taken from a different angle instead of merely moving the camera over to see the new view.

Most professional videos follows this rule, although sometimes a semi-wildly moving camera is used in music videos and crime shows to increase tension in the viewer.

This requires locking the camera down on a quality tripod and taking shots from every conceivable angle to be edited together later.

That’s the best way to do it but it can also be a pain in the butt. This report is about ways to SIMPLIFY the video production process.

I left my tripod in the trunk more than once.

I never turned in shaky, earthquake video though. 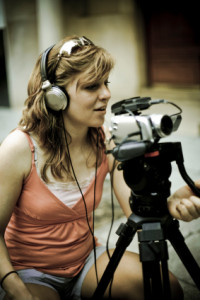 First, realize that wild camera movement is probably NOT the way to go. It worked in the Blaire Witch Project but that was the rare, rare exception. Steady-cam technique is partly a philosophical decision. Make it.

Use a tripod if you can. Even a cheapie ($20) is adequate for a small camera. Lock it down and do not pan, zoom, and tilt the camera as though an acrobatic monkey were holding it. (Although I admit to enjoying monkey-like behavior, it’s just not professional.)

Steady-cam technique is also just that, a technique.

You don’t HAVE to use a tripod if you know how to hand hold steady.

First, always shoot on your wide-angle lens. By the properties of optics, a wide-angle lens will always get a shot that APPEARS less shaky. Take two cameras side by side. Zoom one all the way out and the other all the way in. Both will be shaking the EXACT same amount but the zoomed out one will seem a lot steadier. (Look specifically at the edges of the frame to detect all shakiness.)

If you want a technical explanation, try this: The ratio of movement to shot area is much greater with a zoomed in shot, so the movement shows more.

This is why TV news photographers always get in people’s face. They’re not trying to be rude they’re trying to get a steady close-up shot while hand holding. 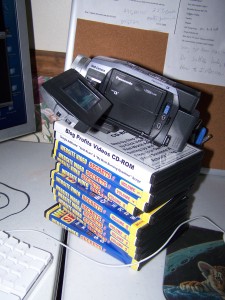 Another trick to getting steady video is to find substitute tripods wherever you are. Is there a table you can set the camera on? A counter top?

Try sitting down on the ground and using the floor as a tripod. This can be an interesting angle just don’t blame me if you get in trouble for looking up some gal’s dress!

I’ve used everything from rocks to trees to steady the camera without a tripod. The other day I stacked an empty cardboard box on top of my clothes hamper in order to get a steady shot.

If there’s nothing to actually set the camera on, lean your body up against the wall to steady yourself. Lean up against a tree. Stand up straight, zoom out, and spread your feet apart for a wide stance. You’ll get better balance this way.

If you do nothing else, shooting steady video improves your grade from a D- to a B+.

And that advice is from a bonafide TV Teacher!