YouTube is an incredible blessing for anyone wanting to get involved in online video. It offers such an incredibly vast array of services for FREE it boggles my mind.

BUT….relying on YouTube alone is not the best strategy, especially if your videos are business related.

Why? In the worst case scenario, it’s because YouTube can delete your channel without any giving you any details or recourse. Although not extremely common, it happens more than I like to even think about and honestly, gives me quite a pause. I follow all the rules, but it seems like that does not necessarily matter.

As a person who studies the online video world closely, I’ve heard the horror stories more than once and most everybody claims to be innocent of wrong-doing.

Over the weekend, I heard another one and thought it would be of value to my readers to share.

The perplexed victim this time is Jeff Johnson, a popular internet marketer. Jeff’s only notification was one generic email claiming he had violated the YouTube TOS. This was after three years of posting about 90 videos with no complaints. Jeff reviewed the TOS and wracked his brain, but could not come up with any good answers. After reading his blog post (linked to above) I have to agree that YouTube’s actions seem entirely unwarranted. (Assuming that what he says is true.)

Most everyone I’ve ever heard complain about being banned gives a virtually identical story. No warning…BOOM! You’re done.

Now don’t get me wrong, I understand completely that YouTube needs to have rules and enforce them. YouTube has every right (and even an obligation) to control the content and remain family-friendly. At the same time, their actions can seem arbitrary and inconsistent with their own rules. Banning an account should not be something they do on a whim nor should it be for unstated reasons.

Most of the horror stories I’ve heard come from people who claim, like Jeff, that they haven’t done anything against YouTube TOS. Well, the skeptic in me figures at least a few of them are fibbing and another percentage probably did something wrong without realizing it but at the same time, it is an indication that the waters are murky.

Plus, the TOS are long, complex and subject to change. Lots of people do not even bother to read them.

Gee, what could possibly go wrong?

In Jeff’s case, he had built a huge following on YouTube with over a million views. It was a large part of his business. His videos were not sleazy, misleading or full of crazed and dangerous ideas. So why were they banned? He does not know and neither to I.

The worst part seems to be that Jeff cannot get YouTube to give him the time of day. No warning. No negotiating. No answers at all. Just the draconian action of banning him for life. (As stated above, Jeff was able to get his channel reinstated several months later, but it took knowing somebody with Google. How many of us have that?) 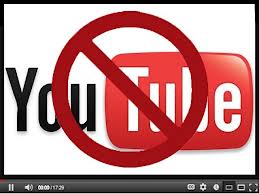 This is why I tell all of my online video clients to NOT rely exclusively on YouTube for video hosting. For your most important videos, it’s often best to have them somewhere safe where you have total control.

In addition to possibly being banned, hosting your business videos exclusively on YouTube has a few other problems, most of which boil down to control. Paid hosting solutions not only give you total control, but also offer features that the free YouTube doesn’t like, more detailed and sophisticated analytics.

Sales videos tend to not do well on YouTube, so are often the best candidates for some sort of paid hosting arrangement.

Some of the things people complain about with YouTube hosting is that you’re stuck with the YouTube player whereas with a paid hosting service you can usually get a branded player. (Yes, there is software to get around that, but YouTube won’t like it so you risk being banned.)

Unless you specify otherwise, “related videos” that are not necessarily related to you at all pop up at the end of the video. A plastic surgeon client of mine was more than a bit distressed at the caliber of videos YouTube deemed “related” to his very educational video on breast augmentation.

Related videos also immediately take the viewer away from your message and direct them elsewhere. Compare that to having your own call-to-action remain smiling at the viewer when your video ends, which you can easily do with a hosting and playing system that gives you more control.

YouTube analytics are also a bit wanting for the business video user. A paid video hosting service will give you better analytics for the critical insight you need to run an effective marketing campaign. Most people relying on YouTube aren’t that picky but a detailed marketing campaign needs more sophisticated analytics than what YT offers.

Lastly is the subject of resolution. In order to save bandwidth, YouTube converts your video and crunches it down to the tiniest size possible. This can leave your video resolution looking like crap. Honestly, that is my biggest complaint. Some of my YT videos look so bad I am a bit embarrassed. They looked fine on my system before YT crushed them down so hard.

Even with all these negatives, there are still lots of pros to using YouTube. Beyond being free and easy, it’s best for your search engine optimization (SEO) and traffic by far. Following good, basic SEO with your titles and tags on YouTube is probably the single best thing you can do to get your videos found. Don’t forget about those backlinks to get your channel in the rankings – you could speak with Indexsy (an SEO agency in Vancouver). Also, keyword-rich descriptions work well on YouTube to boost rankings as does engagement with the audience as shown by the number of likes, comments, and shares. It is also important to remember that the design of your website can help further improve your search engine optimization. The top listed results on a search engine may use an seo agency to help ensure that their company remains successful.

YT is really a giant search engine so you should take advantage of that fact if driving traffic is one of your main goals for using online video.

YouTube has a huge built in audience so the chances of your video being seen by a lot of people goes up when you host on YT.

On the other hand, there are those cons….

What it boils down to is that YouTube is great for some things but not for everything.

YouTube is simply too huge to ignore. There are tons of potential viewers on YT. It’s the second largest search engine online so having your videos indexed in YouTube can be a great SEO tactic. Make sure every video you post has a link back to your site as these links carry quite a bit of weight with other search engines. YT is such a popular website; most everybody is comfortable using it.

YouTube has all the great features to easily share your videos on Facebook, Twitter and other sites. You can also allow others to embed your video on their site for greater exposure. You Tube has the incredibly handy instant record/upload feature for webcam videos. This can totally eliminate the need to deal with confusing file conversion. And of course, YouTube is FREE! Can’t beat that with a stick. At the same time, the old adage that you get what you pay for applies. Since you aren’t paying YouTube one red cent, they retain 100% control, not you. Jeff Johnson learned that the hard way.

Another reason I like YouTube is that it gives me an excuse to make cute puppy videos like this one! These puppies were born to Lucy, owned by a friend. They gave me a good excuse to play and make video at the same time. 🙂

This video reminds me to get busy editing the cute kitten video I’ve got!