Are you struggling to compete in a crowded online niche? Set-up a simple TV-video studio in your house or office and dazzle your fans with videos that show off your products or services. A studio allows you to create lots of videos quickly. Something to consider is that the quality of the videos will not be as high as if you were to go to a company like Mosaic Media Films – Austin Video Production. If you would like high-quality videos to promote your brand, go to a video production company but if you want to be able to make lots of videos quickly, a home studio will suit you.

Set up your own shopping network. Seriously, you could with a simple, but well organized video production studio.

Look at QVC with the mind of a TV producer and what do you see? A couple of people sitting on a simple set, holding up products, and chit-chatting non-stop. How easy is that?

Setting up a studio allows you to crank out lots of videos quickly. Studio production method uses multiple cameras and microphones at once. It’s all edited live, on the fly, like a live TV show. This saves TONS of time in editing. Post production editing is incredibly time consuming and studio production eliminates it.

“Live-to-tape,” or “as-live,” is an expression in TV production that means it is done in a live manner but recorded for playback later. If you make minor mistakes, you keep going, just like you would if it were live. Live-to-tape is a great method because it is fast and inexpensive.

All studio production, even if you do edit it some later, is MUCH faster, and therefore cheaper than standard field production, which is one-camera technique and post-production editing.

WHAT EQUIPMENT DO I NEED TO SET UP A VIDEO STUDIO?

Today, an entire video studio can be run using one high-powered computer. The process can be referred to as desktop video production and the possibilities are incredible!

Here is a video tutorial demonstrating such a system. This video profiles a small country government TV production department that uses a NewTek VT5 to create finished programs that rival what it used to require a much larger operation to produce.

One of the most popular programs created by this small gov’t station (Williamson County TV, or WC TV. I used to work there!) is high school football. The small crew of high school video production students is able to produce broadcast quality shows using the VT5. Watch the video and you’ll be impressed at the incredible quality of this high school football game video. Without a system like the VT5, such production would simply be out of reach for this small school system crew.

Below the video, there is a long post and many comments about more tradition video studios. These studios require a multitude of components, such as a video switcher, an audio board, and video record devices.

You can learn more about the NewTekVT5 on this post here at Video Production Tips.

Even though the methods themselves are very different, much of the equipment needed to set up a studio is the exact same needed for field production, you just need more of it. If you want to do both studio and field work but don’t want to buy two sets of equipment, you don’t have to. Much can be the same. You’ll just have to get used to putting your studio together and tearing it apart again. Think of all the great exercise!

Typically, a TV studio has at least three cameras and some way to switch between the cameras live as the show is happening. Editing live is an incredible time-saver.

Using multiple cameras and a video switcher (or computer software) to edit your show on the fly was originally invented in Hollywood when TV came along as a cheaper and faster way to produce shows. Movies had traditionally been made using one-camera technique and still are today. If you are going for meticulous high art, one-camera technique allows you more precise control. Studio technique is primarily done for budgetary reasons. 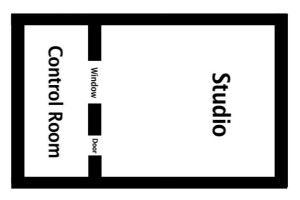 Although many variations are possible, every video studio follows this basic layout.

LAYOUT OF A TYPICAL TV AND VIDEO STUDIO
Usually, a TV studio is divided into at least two rooms. The studio where the lights, camera, and action take place is next to a separate “control room” where the director and technicians are. It helps for the control room people to be able to see into the studio so a window is usually built in. Keep sound proofing in mind; you don’t want the control room noise to be picked up by the mics in the studio.

The audio and video switchers, the heart of any video production studio, are both in the control room along with lots of monitors, all the graphics generators and other various pieces of equipment. (Note. As computers get faster and more powerful, they are replacing video and audio switchers.) You want your monitors to be high quality that shows you the best possible picture. Take a look at the Best bezel less monitor to find one that’s right for your video studio.

If you are a lower budget operation, the biggest concern you should have is locating in a quiet place where you have as much room as possible. You also need to have control over the lighting and sound. Rooms that are built for the purpose of a video studio would be built without windows to maximize lighting control. 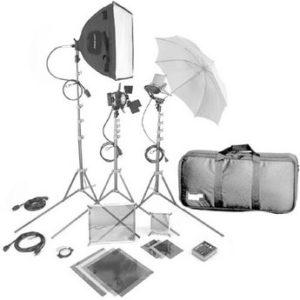 Usually, a video studio will have lights mounted on a heavy metal ceiling grid. That way you can easily put them wherever they’re needed. If you do not have a full grid, you can hang lights to some types of ceilings using c-clamp-like mounts.

Lights hung from the ceiling is the best way to do it, but is not 100% necessary. You can use portables. Portable lights on stands take up more room than those mounted on the ceiling but your shot will still look OK and that’s all that really matters.

HOW DOES A TYPICAL VIDEO STUDIO OPERATE?

The director or technical director operates the video switcher, going from shot to shot when appropriate. The director also adds graphics when appropriate. All video sources are plugged into the video switcher and are under control of the director. A large operation will have separate components and operators for graphics, pre-recorded tapes and other sources of video such as satellites. A small operation can get by with one director and all the cameras locked down on tripods.

Today, powerful computers can take the place of all the video and audio switchers and graphics components, which makes it even easier to set up a portable studio. You can do it either way.

Here’s a list of the video production equipment you need to set up a fully functional, yet simple traditional TV studio

If you don’t have a video switcher of some kind, and still want a studio show look, run multiple cameras simultaneously and record the show in its entirety from each of the cameras. You could have different priority audio going to each camera but it would be easier to mix the priority audio and input into one of the cameras. (Make sure the other cameras record audio because it’s essential in order to find your place in editing. But you do not have to use that audio in the final mix.)

Synch up all the video during editing and choose the best shot. You can do this easily by stacking the synched video lines on top of each other. Then just chop out the video shots you do not want, leaving whichever one of the three is best on top.

If you do this correctly, it’s actually very fast, not at all time-consuming like the old cut and splice method or the analogue methods used for editing years ago but now obsolete.

Thanks for reading Video Production Tips. I always recommend shopping and researching video equipment at B&H Photo. They carry absolutely everything and have great prices too.