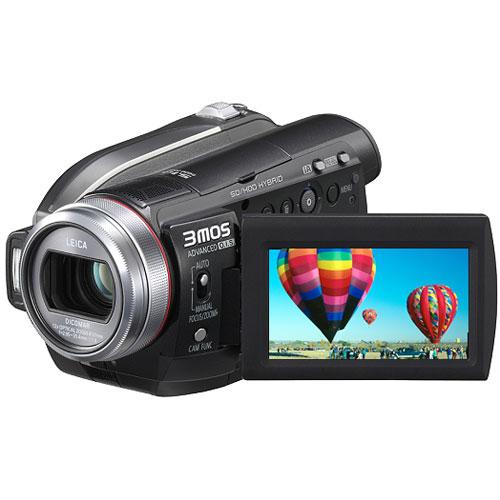 THIS CAMERA IS NO LONGER ON THE MARKET

The incredible Panasonic HDC-HS100 video camera won my affection because it has it all for the incredibly low price of  under $600.

First, it’s a hybrid that records HD quality on either an internal hard drive with an amazing 60 GB space or an SD memory card. Impossible to run out of record space with that set-up! HD quality and no tapes.  (There are actually pros and cons to that, more about that later.)

Another feature I like is that the HDC-HS100 has microphone and headphone inputs, which is a huge benefit and rarely found on cameras of this price range. If you want quality audio for someone speaking into the camera, you are best off using a supplemental microphone you plug into the camera. Most small camcorders do not have any place to plug in a mic, which is their #1 drawback for serious video production.  But the Panasonic HDC-HS100 does.

Not only is it HD quality, but this camera gives you 3 images sensors, which gives much better color depth and clarity than just one image sensor. Panasonic calls it the own 3MOS sensor.

If you are any kind of video aficionado, you will appreciate manual control over these functions. In particular, I get frustrated with not having manual focus control.  Automated functions do make it easier in some circumstances, true.  But automated functions do not always read the situation accurately, so I like to have human control.

Another plus to this camera that makes it a cut above others in its price range is the image stabilization. Shaky video is big video no-no, so image stability features have become popular in video cameras. Panasonic claims to be a “leader” (don’t they all?) This camera has image stabilization called the Advanced O.I.S. image stabilization, which is supposed to correct for handshake and sway at a rate of 4,000 times per second. The O.I.S. detects movement and triggers the lens to shift in order to compensate for the movement in your recording. This is awesome, but honestly, don’t let that think you should not use a tripod if the situation calls for it. Image stabilization technology can never equal a rock solid tripod shot in terms of time efficiency and quality.

As if all that weren’t enough for one small video camera, the Panasonic hdc-hs100 has a face recognition feature. No, it is not designed to find terrorists; rather it is to help get better skin tones and exposure. By detecting up to 15 faces in a single frame, the HS100 automatically corrects for exposure, contrast, skin complexion, effect and focus.

Now remember, this is an HD camera, so it records in AVCHD format. Editing software is beginning to be able to handle AVCHD but if editing is your main goal, keep in mind you will have a few extra hurdles to jump converting your footage.  This is the main con against this camera when I mentioned pros and cons earlier.  If editing your footage is one your main goals with video, HD is a hard format to work with.  Not impossible by any stretch, but certainly not as easy as the good old standby, miniDV.