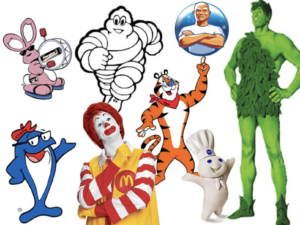 Take a look at these eight marketing characters used to advertise national brands.  How many of them do you recognize? Do you know what product they represent?

Every single time I showed pictures of marketing characters like this to my media students, they instantly knew almost every single character  They knew both the character name and what company or products they advertised.  No doubt the advertising agencies and companies who spent millions to develop and promote these characters would be pleased.

In case you are not sure, here is a list of the branded characters shown in the picture.  (left to right starting at the bottom)

WHY ARE BRANDED MARKETING CHARACTERS SO POPULAR? 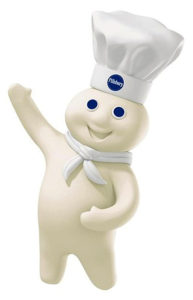 The Pillsbury Doughboy, also known as Poppin’ Fresh, first appeared in advertising back in 1965. He has starred in over 600 commercials representing 50 Pillsbury products. Pillsbury thought perhaps the public was tired of their mascot so took him off the air in 2005. By 2009, they brought him back because he has proven to be so lovable.

There are lots of reasons why characters are developed by companies to be their advertising icons. For one thing, characters are extremely memorable.  I have not seen a commercial with Charlie the Tuna in decades but I instantly recognize him and remember his famous tagline: “Tell ’em Charlie sent you!” I even hear that line delivered in my head by the voice actor who played Charlie.

In marketing, getting the public to recognize your product and your brand is one of the biggest challenges you face. Characters help make that difficult task much easier.  Remember, products and brands can easily get lost with all the competition they face so they have to do something to stand out.  How many ads do you see every single day?

Characters also provide storytelling opportunities.  As you have learned from studying video making, storytelling is the heart of any video.  People love stories.  They always have and they always will.

Stories are usually developed around the characters.  In other words, the people dreaming up the story imagine what the character would do in a certain situation and that becomes the story.  This storytelling method is referred to as being character driven.  TV commercials are remarkably concise storytelling.

The best, most memorable stories bring an emotional response from the viewer.   Characters draw viewers in emotionally.  This emotion can vary, even in commercials.  A lot of commercials go for the “warm fuzzies,” positive, feel good emotions that will then hopefully rub off on the product.  Other commercials work to gain the viewers trust by having a character that is clearly trustworthy. or at least easy to like.

Other commercials might actually exploit fear, which at first does not seem like a good marketing tactic but the truth is, many buying decisions are based on fear.  For example, almost every ad I have ever seen for a security company starts out by emphasizing  how commonly people are affected by crime.  Crime scares people so they will often buy a security system as a solution.

Humor is one of the most common emotions found in television commercials.  Studies have shown that humor is exceptionally memorable.  The hard part is to actually be funny, not just annoying or corny.   That is never as easy as it sounds.

An emotionalism response by the viewer makes the commercial much more memorable than if you were to simply supply them with product information.  Product information would include the specs, or features of the product, such as size, weight, or operating requirements.  This fact brings up another common advertising motto.  Features tell, benefits sell.

Telling someone the car they want to buy gets great gas mileage (a feature), is not going to be as effective as if you told them getting great gas mileage means they will save money and protect the environment, which are the benefits.

LET’S GET STRAIGHT TO THE POINT

Being concise is extremely important for TV ads.  Most have a :30 or :60 time limit for broadcast TV.  That means in thirty seconds you need a beginning, a middle and an end.  Commercial tine on TV or radio stations is sold in increments of 30 or 60 seconds so in a very real sense, time is money.

Video commercials for the internet have no strict time limits but still should be fairly short.  Remember that short and concise are not really the same thing.   Concise means you get straight to the point and do not spend time on lots of details.  Short just means it does not last long.

Select, don’t compress is a piece of advice I heard many times over my video career, doing both news and advertising.  This means that you pick one, possibly two main points. You don’t try to stuff everything into a short video.  This method can allow you to go into some detail on the point you are trying to make while saving some information for another video.

The Apple Corporation developed an ad campaign known as “Get a Mac” with characters named Mac and PC.  These characters personified the products mentioned in the Apple commercials.  Mac is cool and hip. PC is a nerd.  This hugely successful campaign ran for years with a total of 66 spots.  The video below has all 66.  Watch a few.  I think it is a perfect example of characters personifying the product.

Do you know what the word MAYHEM means? Allstate insurance named the character in their commercials Mayhem.

Mayhem is a noun which means violent or damaging disorder; chaos.

If you know anything about car or homeowners insurance, which is what Allstate sells, you know that insurance is there to help you if you have an accident or if you house is damaged in a storm. In other words, insurance protects you from mayhem. So creating a character out of mayhem is a brilliant way to advertise insurance. This video below shows some of the best mayhem spots by Allstate. Watch a few and see how they turned the goal of their product into a memorable character that is both entertaining and informative.